An article with Carol Pemberton from Black Voices 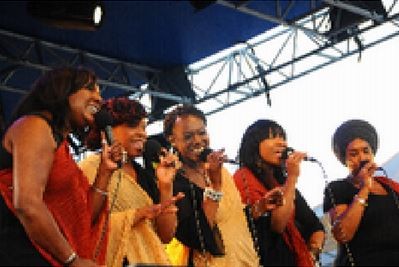 An article with Carol Pemberton from Black Voices

BLACK VOICES is Carol Pemberton and that’s me left of picture. Next to me are Evon Johnson-Elliott, Sandra Francis, Shereece Storrod and Celia Wickham-Anderson.

BACK TO FRONT
Sandra and I are the original members of the group. We were backing singers for different pop bands in the 70s & 80s. We often did studio session work as well as live gigs for the bands. In rehearsal, we knew our voices and harmonies sounded fantastic but when we were performing with the band, it was like the hard work we had put into the harmonies/blending didn’t matter. Drums or electric guitars with incredible effects took over - and we couldn’t be heard!
Sweet Honey in the Rock, an American all female a cappella group, was touring the UK at that time and seeing them in performance inspired me to form a purely vocal group. I asked Sandra to work with me. Thankfully, she said yes and that’s how BLACK VOICES came about in 1987.
Many women have contributed to where BLACK VOICES is today. The current line up has been together for over 13 years but every woman who has worked with the group as part of the collective has added something to the sound that is very uniquely and distinctively BLACK VOICES.

MUSIC WITHOUT FRONTIERS
Our performances and work are dedicated to preserving the niche art form of singing in the black oral tradition. It’s the love of our lives and we promote its significance and history wherever we travel – UK and abroad - through our concerts, education outreach programmes and singing workshops.

The black oral tradition has had a massive impact and influence on a lot of the music you hear today, blues, jazz, R & B, Rock ‘n Roll and pop but also on other music genres. We keep our repertoire fresh to appeal to the widest possible audience to demonstrate the power of the unaccompanied voice in full song and we’re not afraid to experiment.
When you come to one of our performances, you’ll see how we intertwine the musical history and rhythms of Africa, the call and response, the ring shouts and the rich crafted musical genius of spirituals with other classical compositions.
We’re very lucky to work with some outstanding composers and musicians.
It’s difficult to single out any particular one but our current performances include arrangements by Kgomotso Moshugi of South Africa’s a cappella collective No Limits, an arrangements by Peter Daley including Bach’s Air on a G String and a heart skipping version of Nina Simone’s ‘Four Women’ arranged by Laura Mvula, a former member of BLACK VOICES.
Then of course, there’s Mark Kibble, Take 6. In our opinion the best a cappella group. We asked him to write a song for us and ‘GO WHERE I SEND YOU’ is the result. He came over to spend time with us in our hometown Birmingham, UK to develop the piece before we recorded it. Not many groups can say that they have an original composition from one of their idols.

HOW DO WE SOUND?
Celia and I sing bass in BLACK VOICES. How low we go really depends on how cold it is! It’s not something we ever measure, though other male bases have told us we hit bottom G-F with great ease. If you hear us before you see us, you might assume there must be some male voices in the group. Audiences are always amazed at how low we can go but it’s important for our sound, especially in terms of singing in the black oral tradition where the lower parts need to have an earthy prominence within the music. People will come up to us after our concerts and say ‘You don’t realise there is no accompaniment.’ That’s a really great compliment!

HIGHLIGHTS
There are just so many. We’ve performed in every continent and to the most diverse audiences - from private engagements to worldwide television appearances – and with music legends such as Hugh Masekela, Nina Simone and Ray Charles.
We’re just back from another tour in South East Asia, we travel Europe regularly where we have a fantastic following and in 2014 we’re in Australia again. BLACK VOICES’ biggest gig to date is singing for and meeting the late Pope John Paul in front of hundreds of thousands of people in Loreto Italy.

Performing before Nelson Mandela and meeting him on a couple of occasions in the both the UK and Johannesburg is obviously now particularly poignant and a treasured memory. He described us as ‘Ah. Those beautiful voices.’ That will stay with us forever.

Next post: Noel Gourdin, signed on to organic soul music