Miles Solay: I’ll give my life but I want to know, will you be there? 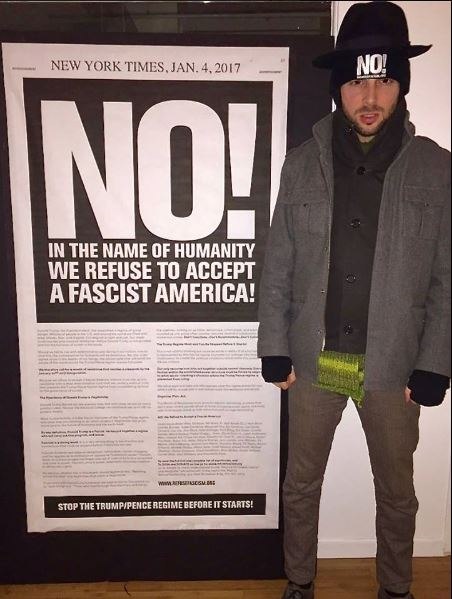 An article with Miles Solay. Solay from Outernational speaks of the imminent presidential inauguration. Miles' views are his own. Photo by RefuseFascism.org

It is January 2017 and we are on the eve of a fascist regime coming to power in the USA. I have been throwing in with the RefuseFascism.org movement to organize millions to take to the streets to prevent the Donald Trump/Mike Pence Regime from  taking power. This moment feels like we are at the end of the Weimer Republic and the beginning of the Third Reich. I say that analogy fully cognizant of its weight and significance. It is time to rise to the challenge to prevent a catastrophic horror for humanity. Millions are outraged. We cannot sit back and to try to fit in. When and where people have done that throughout history, the outcome has been horrendous.

The Trump/Pence Regime is illegitimate because fascism is never legitimate. There are enough crises amongst the ruling elites in American society that if millions of people went into the streets and declared the Trump/Pence Regime as illegitimate it could have influence. And if those millions then didn't leave the streets until the Regime was unable to take power, the seemingly impossible could become possible.

I have been inspired to see people taking to the streets and courageously speaking out. I’ve been in Washington, DC along with the defiant ones of Refuse Fascism and others. I also have been disappointed to see people who should know better doing nothing. Or talking about building some kind of puny opposition for the next 4 years. What are you waiting for?? A registry of Muslims? A wall against our Mexican brothers and sisters? A punishing squashing of dissent?? The most powerful military in history on the brink of using nuclear weapons?! Women with no control over their bodies or reproductive freedom?! Open white-supremacist attack lynch-mobs?!

The hour is late but not too late. Live your life and give your life for the 7 billion. In the name of humanity, for our planet. For it all now.

The Donald Trump Regime will move swiftly. We must rise to the challenge. Every city in the world, wherever you are. Let’s go.

A few videos by Outernational:

Outernational are a band based in New York, with many releases and tours on the American continents and in Europe, as well as collaborations with a large number of artists, behind them. Outernational are currently Miles Solay, Jesse Williams and Nate Hassan.

Find out more about RefuseFascism HERE

Next post: Mark Holub: Still finding out what you are doing is important