Rhonda Smith: - Music has been taken out of what's called music now 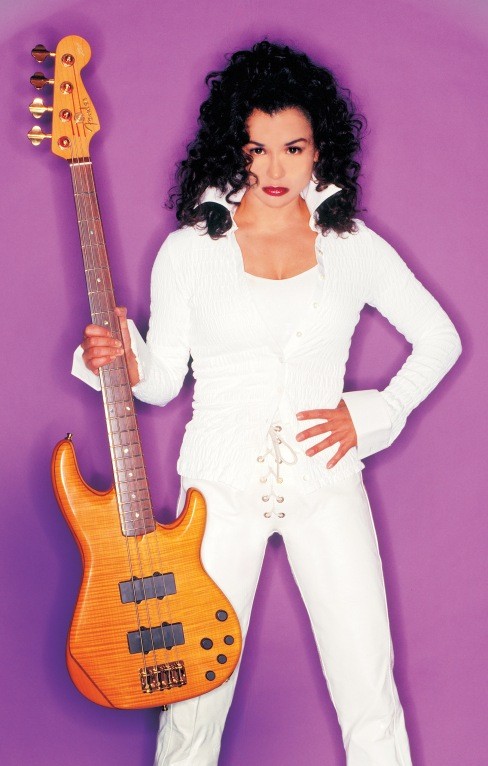 Music to me is a savior. I’m not sure what I would have done without it – I was in ways a little lost. Music is math and discipline – it teaches you discipline, creativity and how to get along with others. Music is a healer, it is going on trips, it helps you become a better person.

The most quoted live moment (to date!) with Rhonda... and she is funky...

When I first started playing jazz in Montreal, Montreal was a jazz hub. My mother played jazz all the time; Ray Brown, Oscar Peterson, Ella….the list was long.

There were many excellent, older jazz players around. My brothers played jazz, and I had an environment around me where females were playing.

I don’t know how it would be seen by most parents these days if their daughters wanted to be in clubs and play music at 15. Classical is looked on with another respect, but other styles of music, if the daughters want to play?

I love all styles of music. It’s a mélange of the heart and of feeling, and I love floating between styles just like the greats have done, and like Prince did too.

I got my initial inspiration for bass from Pleasure, EWF’s Verdine White and Sly & The Family Stone, to name a top three. They are also some of the acts that I would recommend for people who want to listen to great bass-work on record.

Being a musician is pure heaven, pure unadulterated fun. It’s the best job in the world. I don’t mind playing two notes - that can be fun. I only have two requirements when I’m playing. I need to hear myself and the sound has to be good.

Musicians are traveling doctors. We heal people. Music is a foundation to stand on in life.

Having worked with Prince for a decade I thought to myself that I could work with anybody after him. He had the highest standards.

His rehearsals were long and intense, first of all. It was at least eight hours a day.

If he didn’t like something he certainly would tell you. Recording wasn’t allowed. He famously didn’t like bootlegs.

He didn’t read music. He would show you the part, and he would show you quickly. You had to get it. He showed you what he wanted quickly and then he was on to the next thing. He did have patience – he was extremely intelligent. But when he needed what he had showed you, the next day, he didn’t like it if you messed up. You couldn’t ask him ‘Where’s your notes?’. But the second day people did mess up. You had to be strict and get it down the first time.

There was some fun around but the process was intense. He would leave for a few hours and the band would rehearse by itself. He had other things to do, a lot to do. Sometimes he listened from elsewhere.

He was such a prolific writer with a large amount of music. You had to learn it all and retain it. Everything from the roots.

I’m currently in the studio working on my 3d record. I have my band project, CIC – which stands for Canada India Canada as well as for Chronic Idiopathic Constipation…as us musicians can be a bit full of ourselves… I also do shows with Sheila E and Jeff Beck in between. My record is ready when I say that it is. It’s love in motion. I will probably debut some of the material with the group.

We have such a changed industry with manufacturing and downloads. Artists don’t even make CD:s anymore, and not full albums anymore. Figuring out how to deal with all that is part of releasing something now.

What is going on with the music business is like a version of the industrial revolution. Radio has all the control. We have had a lot of rap music, but it’s often so negative. I’m not downing any music though.

The general standard for what ‘music’ is right now, is sad. People who aren’t musicians are called musicians, and the kids don’t know the difference. Music has been taken out of what is called music now.

The royalty streams have dried up thanks to things like Tidal. Artists' work is played as much as anyone likes – for pennies.

The only way to go, to go forward in all this is live music. We need to play live and kids need to see people play live.

Rhonda Smith - "To Get With You" from the album RS2 (2006/215 Records)
RHONDA SMITH is a bassist+ based in the US, after being born and raised in Canada. She started out working on the Montreal jazz scene and studying music at McGill University. SMITH has released two solo albums to date and famoulsy worked with Prince for a decade. Her other collaborations include Jeff Beck, Sheila E and Chaka Khan. RHONDA SMITH also now runs her band project CIC.
FIND OUT MORE HERE

Previous post: The Music Journalist of the Year is Anastasia Tsioulcas!

Next post: Mutlu: - My album is about different aspects of where I am in life