Miriam Kaul: - The main thing, no matter what, I will keep on playing music 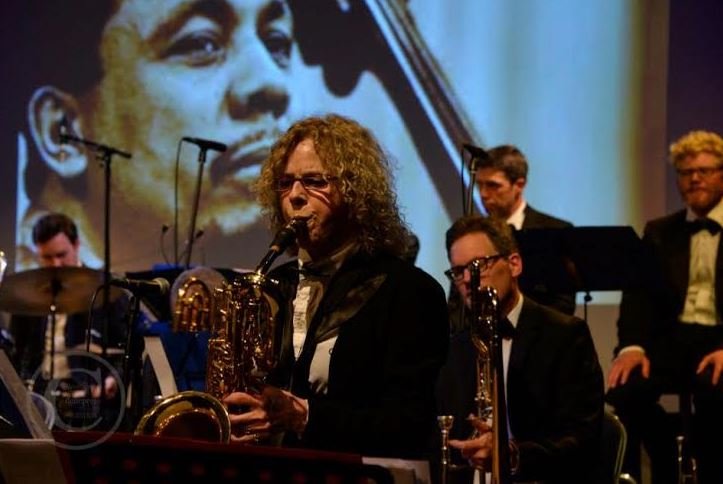 Growing up, in Connecticut for a short time, my father always played classical music on a transoceanic radio that he loved. He also played violin. Unfortunately, he left us under tragic circumstances. Then, financially, we were forced to move in with my Grandmother, in West Va. Not exactly the jazz Mecca of the world.

However, that was where I discovered jazz! I used to stay up very late listening to a radio station out of Rochester, New York. It was a jazz station, but I did not know at the time, what jazz was. One night I heard what to me was the most magnificent thing I had ever heard. It was John Coltrane, playing "Lonnie´s Lament". For me, I did not distinguish that from classical music, I simply knew it was beautiful, it was wonderful, and it was like nothing I had ever heard before. I knew I wanted to play saxophone! My Mom bought me a rather kaput used alto sax (I did not know at the time the difference between alto and tenor). I played around with it and began to pick up tunes I heard „by ear“. What I do remember was trying to play along with a Cannonball recording, and then I couldn´t figure out what to do in the bridge because it was more complicated.  A long time later, I learned why. Later, of course, I listened to everything, Cannonball, Gary Barz, Joe Zawinul, Tito Puente, Gato Barbieri, and many more.

Then, we went to Baltimore, Maryland, and that was the beginning of my real exposure to jazz. I also at that time, began taking some courses at Towson University, where Hank Levy, a brilliant arranger who wrote for Stan Kenton, was a teacher. (I also sudied for a Masters Diploma in American History) But, the real learning experience was when I discovered the little „hole in the wall“ jazz clubs in Baltimore.  They are not in the Tourist´s Hand Books.

I had heard a vibes player at one of the clubs. I was just starting out and had managed to book a few jobs, (I could talk and convince more than I could play at the time). although I wasn´t quite ready. I called the vibes player, Jimmy Wells, and said I have a job, would you play with me? He hesitated a bit and said yes. He asked who my rhythm section was, and I said I didn´t have one. He brought his own, and also brought with him his own steady sax player, Mickey Fields, and I heard greatness live for the first time. I was very, very naive. So, we played this job, and at the end, Jimmy said, „Miriam, you don´t know no chord changes“. I said what`s a chord change. So, that was the true beginning of my education. Later on, his girlfriend told me Jimmy had said yes to my job out of curiosity. He wanted to know who this little white girl was, who called him out of the blue, since after all, he was a top name in Baltimore`.  Jimmy hired me to do some jazz school programs with him and be the moderator. I agreed, on the condition I could play a couple of tunes. I said, I knew how to talk, I wanted to learn how to get better playing. So, he agreed. Mickey, the sax player was there, and always stood behind me and encouraged me, gave me little clues if I got lost. They became very dear friends to me. Years later when I was playing with a trio at the Hyatt Regency, Jimmy came up and said „you´re starting to sound like a real saxophone player“. That was a tremendous compliment. 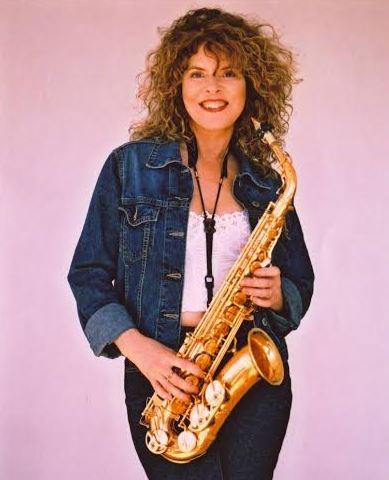 I did not know at the time that I had the wonderful opportunity to meet the „old school“ of players. They didn´t read music, knew 1,000 tunes, learned from records, and simply played great. That is something one does not learn at a University. Of course I continued taking courses to develop my education, but I never stopped going to those little clubs in the black, and mostly dangerous neighborhoods. I can truly say that folks looked out for me. Once they realized I was serious about the music, they really did see that I got to the car unharmed, showed me some musical tricks, and more importantly, took me under their wings. I also heard Gary Barz at one of those clubs (he´s from Baltimore) and his sound and ideas changed everything for me regarding my musical direction.. He and Mickey Fields on the Bandstand together is sui generis, unique amongst the gods.

I heard Richie Cole live in Washington, D.C. And had never heard many alto players live. I applied for and received a National Endowment for the Arts, a travel/study grant with him. I learned from him to transpose spontaneously from concert key to alto key.  Also, many tunes I should learn.  He let me always play the last tune with him on the Bandstand for his concerts.

Meanwhile in Baltimore, I got more and more jobs, met more and more people. I met Gary Thomas at the Sportsman Lounge, and we ended up doing some jobs together before he left to play with Miles Davis, Jack Johnette, Greg Osby, etc. Also in Baltimore, I had the privilege of playing with Dennis Chambers. He was already on the road at that time, first playing with Parliament Funkadelic and going on to the Brecker Brothers, Carlos Santana, and everyone imaginable. He always stayed modest and a Baltimore person. When he was in town, if you asked him, he would come out and play, even for 40 dollars. That´s the kind of person he was. I remember playing with him in a Quintett on a little boat that cruised around the Inner Harbor of Baltimore, to entertain tourists. He paid me a great compliment. He said, „you´re gonna be fine, just keep on playing.“

I called him years later to play on a CD, which he did, and so I also got to record with both Dennis and also Lonnie Plaxico on bass. The rest of the musicians were the Baltimore gang, Tim Murphy, Tom Williams, also great musicians. Tom Williams played a brilliant solo with Jon Faddis on You Tube. Incidentally, Tom Williams, Tim Murphy and Geoff Harper also played on my CD. Plus my best friend, saxophonist Leigh Pilzer, who plays in the DIVA Big Band in New York.

I came to Europe and put together a jazz Christmas CD because I was homesick. It turned out to be fairly successful and I got many jobs from that. It is called „Christmas Time is Here“.

I first landed in Köln upon coming to Europe. I came because I wanted to have that adventure and that experience. I had come twice to Frankfurt am Main, to play with an American Band, and used the opportunity to go out and meet German musicians. When I decided to come to Köln to see what Europe was all about, I started meeting folks and I did many tours out of Köln and got to see things I would have never normally had the chance to see and experience; Germany, Austria, Switzerland, Italy, Poland, Hungary and many more. I played with Joy Fleming, Bill Ramsey, Helen Schneider, Peter Fessler, King Size Dick, and many others. I played with the RIAS Big Band in the saxophone section when they needed an ersatz person, if some sax player called in sick, or didn´t want to make a tour.

While in Berlin, I got a call to record with a German arranger, Peter Herborn. The recording was going to be live in New York. I said yes, and it ended up being like „old home week“. Gary Thomas played tenor, Greg Osby played lead alto, I played second alto, and two other N:Y sax players were in the section. Robin Eubanks and Dan Gottshall were in the trombone section. Unfortunately, I have forgotten the other names.  Gene Jackson played drums, Uri Caine played piano. It was an amazing experience with cream of the crop musicians. The CD is called "Large One".

I did another CD in Berlin with Pete "Wyoming" Bender, called "Around the Korner", with a super blues singer, Peter Thorup.  We had a great horn section.  I still like that recording a lot.  I also got to play on some recordings done by the RIAS Big Band.

In most situations, I tend to play in a Quintett format because that´s how I started out, and although I enjoy playing in Big Bands, a Quintett gives more room to take longer solos. There is more freedom.

There are differences playing here in Europe to playing in the States. In the States, there are rarely rehearsals. If one is playing in a horn section with a famous R & B group, such as The Funk Brothers, The Temptation, The Supremes, the band leader simply goes through the music, points out some tricky parts and sings them. You don´t even take your horn out and it never lasts more than 45 minutes for the „rehearsal“. Here rehearsals can take two, three, four hours to put together a project. The competition is simply greater and more intense in the States. One only gets one chance. If you mess up, you won´t get called again. As for the jazz jobs in the States, there was rarely a rehearsal. You called the musicians and gave them a list of tunes you wanted to play. They learned them from a record or a CD and the first time we played them together was on the job.

But here there is more of an opportunity to play experimental types of music. The only place you hear that kind of music in the States is New York City, I think. Here one can try out new ideas much easier and have a public accept them. Jobs in the States are more commercially oriented, if they pay well.

But, the jazz clubs in the States rarely pay well. And, it is too far to go to different States very easily. Because Europe is small, there is the opportunity to do concerts playing really hard, serious jazz and getting paid for it. It is easy to go from one country to another. 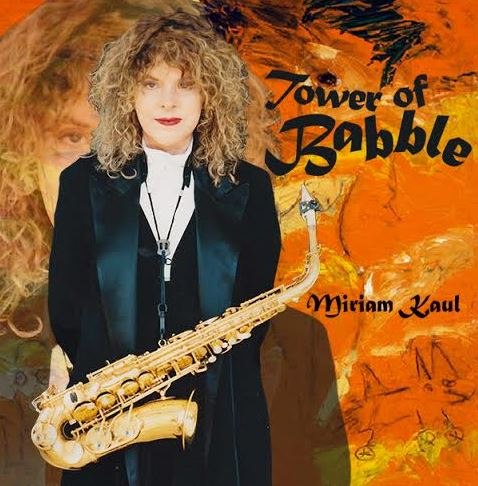 Trying to think about my plans for 2016, puts me in a real quandry. I just finally finished my own CD, after having played on so many CDs of other musicians. It was a tremendous relief to finish it, because I have always had a difficult time of letting something be finished. I always think I should go back and change this little thing or that. It is hard to let go. My CD is called „The Tower Of Babble“. In the EPK is a little bio, and some information on the inspiration for the CD. I received a Stipendium from Zueruckgeben, an organisation that supports creative endeavors of Jewish Women and that helped support the making of this CD, as well as a Senat´s Grant.

I want to spend some time in 2016 developing venues for the music from the CD. I might want to go do some concerts in the States. I think about maybe writing more tunes. I am interested in experimenting and changing my playing style.

Basically, I am just trying to figure it out and try to approach each task one at a time so I don´t get overwhelmed, and to stay open for what ever opportunities may come.. But, the main thing is, no matter what,  I will keep on playing music!

Miriam Kaul is an American saxophonist based in Berlin. She has recently released her record "The Tower Of Babble". Find out more here: www.mkaul.com